Two of the exhibition's fish crated and ready to load in the semi trucks.

On September 5th, 2016, The Discovery said farewell to its first-ever traveling exhibition, Monster Fish: In Search of the Last River Giants, hosted in partnership with National Geographic and the University of Nevada, Reno. The 6,000-square-foot exhibition focused on the conversation of aquatic biodiversity and sustainable use of freshwater resources, using large-bodied “Monster Fish” as educational tools to inspire environmental stewardship.

Monster Fish first arrived at The Discovery on October 28th of last year in five 52-foot-long trucks. The Discovery was the first museum to host the exhibition after its debut in Washington, D.C. The Discovery’s staff and volunteers contributed nearly 600 hours of their time to the project. From The Discovery’s Finance Director, to several museum Educators and a handful of dedicated volunteers, more than 20 individuals had the opportunity to work with the National Geographic crew on the Monster Fish installation. 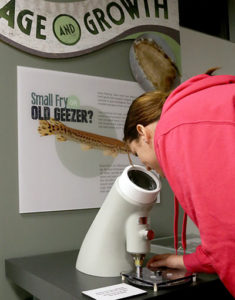 A museum visitor explores one of the hands-on exhibits as part of the Monster Fish exhibition.

Originally scheduled to run at The Discovery for six months (November 2015 through May 2016), The Discovery negotiated a no-cost extension through Labor Day 2016. This extension enabled us to reach more visitors, in more ways. For example, we added five live species of “Monster Fish” – in miniature – including alligator gar, a red-tail catfish, and white sturgeon. Visitors had an opportunity to enjoy screenings of four episodes of the Nat Geo WILD program, “Monster Fish” with a special introduction and Q&A session hosted by Dr. Zeb Hogan, National Geographic Explorer and host of “Monster Fish.” And The Discovery collaborated with various scientists and organizations to bring specialized programming to the museum, including the opening of a brand new exhibit in our Nevada Stories gallery, “Underwater Nevada: Connecting Fish, Water, and People,” and hosting “Science Distilled: The Monsters & the Mini’s,” with Drs. Zeb Hogan and Mike Hausner, Assistant Research Professor of Hydrology at the Desert Research Institute.

Overall, Monster Fish was a huge success for The Discovery, drawing more than 128,000 visitors from all over the country to the museum in just 10 months! Of these visitors, more than 16,000 Pre-K through 8th grade students enjoyed Monster Fish as part of a school field trip, 850 K-7th grade campers explored the exhibition, and 250 youth extended their learning during a “Monster Fish” themed museum overnight. Further, over 800 K-8th grade students from rural Nevada schools, including Fernley, Winnemucca, and Silver Springs, interacted with Monster Fish exhibits during its run at the museum.

“It was very fascinating and interesting to see Monster Fish. I learned so much, like monster fish can get up to 1,000 pounds. That’s amazing!” – Hannah

“My favorite thing was seeing the Monster Fish exhibit. There was a game where [we] had to outweigh a monster fish and there was one fish that took about twelve people to outweigh!” – Anastasia

The Monster Fish exhibition may have gone to its next destination, but the hands-on learning continues. For example, during Fall Break, The Discovery ran a very special, week-long “Gone Fishin’” traveling camp, which took campers on a journey throughout Northern Nevada to learn how native species like the Lahontan Cutthroat Trout (LCT) migrate, spawn, and thrive in our arid desert climate. This camp culminated with a fishing trip at Pyramid Lake led by Dr. Zeb Hogan. “Gone Fishin’” camp was made possible, in part, by support from Trout Unlimited – Sagebrush Chapter and the Western Native Trout Initiative.

Please make a donation to The Discovery today to help us continue bringing exciting hands-on science programming and traveling exhibitions to Northern Nevada!