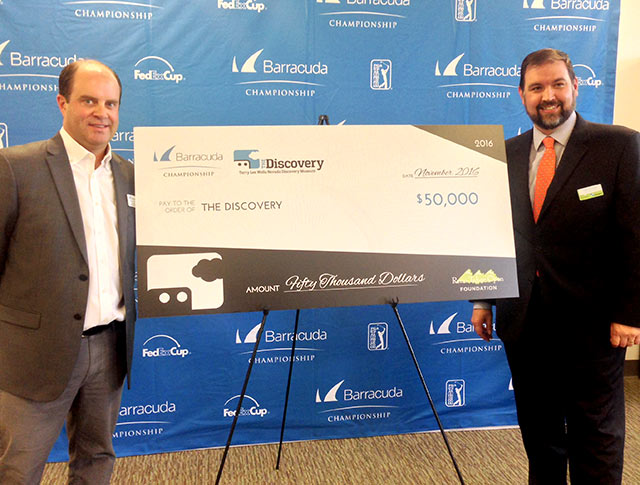 The Week of Giving celebrates the 2016 tournament and a year of giving back to the Reno-Tahoe community. About fifty guests and community stakeholders enjoyed light refreshments and mingled with Barracuda Championship staff, sponsors, Week of Giving charities, and members of the Reno-Tahoe Open Foundation. The $50,000 gift to The Discovery was also matched by the Terry Lee Wells Foundation through their 2016 Challenge Grant, thereby doubling the gift to $100,000 in support of The Discovery’s mission to inspire curiosity, creativity, and the joy of lifelong learning.

“Our community is what makes us and our tournament great and we make it our mission to give back and show our support to an incredible community,” said Chris Hoff, tournament director for the Barracuda Championship. “In addition to continuing last year’s week of giving, the tournament has generated more than $382,000 so far this year.”

During this Week of Giving – in its second year – staff and members of the Reno-Tahoe Open Foundation also presented checks and volunteered their time, including helping to serve dinner at the Boys & Girls Club of Truckee Meadows, working at the Sky Tavern Ski Swap, and presenting a check at half time during the Reed High School football game.

The Barracuda Championship PGA Tour event is operated by the Reno-Tahoe Open Foundation, a local non-profit that has become a cornerstone of the community supporting charitable organizations in the Greater Reno/Tahoe area. Since its inception in 1999, the Foundation has awarded over $3.2 million in charitable giving. In addition to financial support, the Barracuda Championship uses their platform to help promote these organizations during their annual tournament.

At the 2016 Barracuda Championship, The Discovery set up a “STEAM Zone” to bring the ‘science of golf’ to spectators who attended the tournament. The Barracuda Championship also partnered with the Boys & Girls Club of Truckee Meadows to bring their summer camps on a field trip to see the tournament and visit the “STEAM Zone.” Experiences like these can often be out of reach for many of our Northern Nevada youth. The Discovery was delighted to play a role in sparking the interest of locals, tourists, and golf aficionados alike in hands-on, informal learning in science during the tournament.

With the support of the Barracuda Championship, the Reno-Tahoe Open Foundation, and donors like them, The Discovery will continue to engage visitors of all ages, and get them excited about the science that’s present in their everyday lives.

Would you like to support The Discovery’s mission? Please donate online, or check out other ways to give.