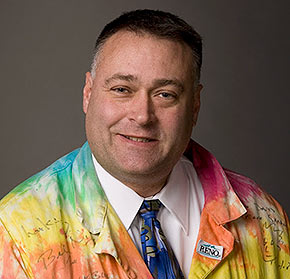 David T. Crowther is an active member of the education community in Northern Nevada, and beyond. David is professor of science education and executive director of the Raggio Research Center for STEM Education at the University of Nevada, Reno. David has been a member of The Discovery’s board of directors since 2013 and recognizes the importance of having a world-class science center in our community. David’s guidance, and connection to the University of Nevada, have helped The Discovery create a number of powerful partnerships that have resulted in richer exhibits and programs for museum visitors.

Recently, David was named the president of the National Science Teachers Association. Crowther began his three-year term as president-elect of the NSTA on June 1, 2016. He will assume the office of president on June 1, 2017.

“This is a huge honor for myself and for Nevada,” Crowther said. “Nevada has never had a president of this organization and, oftentimes, Nevada gets some of the hard knocks in education. This is positive recognition for the work we are doing and an opportunity we can use to let people know of the great things happening in Nevada.”

The National Science Teachers Association is the largest professional organization in the world promoting excellence and innovation in science teaching and learning for all. NSTA’s current membership includes approximately 55,000 science teachers, science supervisors, university faculty and administrators, scientists, business and industry representatives and others involved in science education.

David believes in the importance of engaging “ALL students in science.” Crowther hopes to push science educators to look beyond only gifted and talented students and engage all students, whether it is using science to aid in learning the English language, or simply furthering the natural curiosity that makes science such an interesting field.