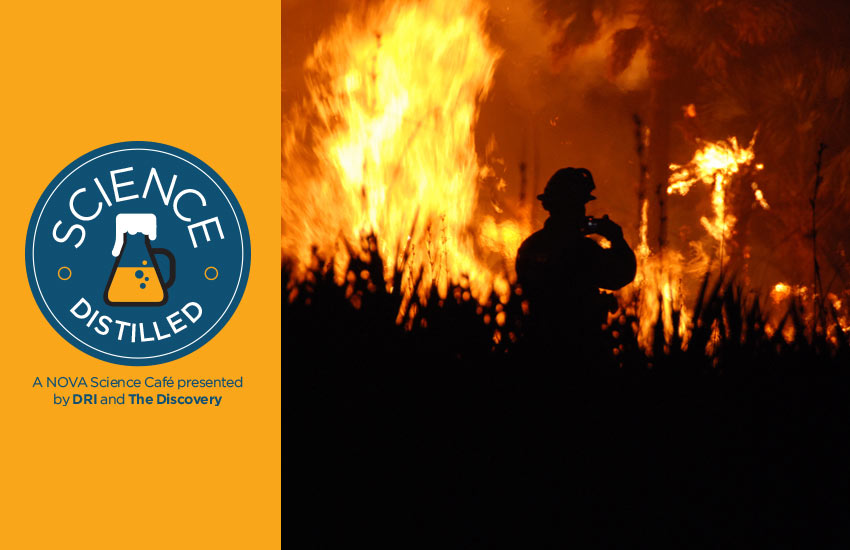 Science Distilled, a new lecture series created by DRI and The Discovery, makes cutting-edge science approachable through presentations on current and curious topics held at hip locations in a social atmosphere.

From our view at the edge of the Sierra, we face a fine line between fear of fire as a force of destruction and awe of the power of fire as a necessary part of nature’s cycles. This Science Distilled event showcases the curiosity and passion held by those on the front lines of fire science. Join us as we feature two talks that will bust the myths and misconceptions around fire, drought, and the role of fire in nature.

Adam Watts — Fire Ecologist
“From what I’ve tasted of desire, I hold with those who favor fire.” Robert Frost’s famous words aptly capture Adam Watts’s passion and curiosity as a fire ecologist. Watts detects ecological “footprints” in patterned landscapes imprinted by fire, particularly the interaction between ecosystems and landscape disturbance. Watts’ reputation for his great sense of humor nearly precedes his reputation as a prominent fire ecologist in our region. It’s hard to top someone whose CV reads specialist in “smoldering combustion” and “pyrogeomorphology”, but add to that work on the frontier of using UAVs in fire ecology, and you have a powerful combination of ecology and cutting-edge research methods.

Tim Brown – Fire Climatologist
Imagine two of the most dynamic, daunting, and complex phenomena of science:  fire and climate. Now try imagining the spunk and the brainpower it takes to dedicate your career to studying the interaction between the two – then imagine communicating that complexity to decision-makers! That’s Tim Brown. Leading a sometimes-hectic life of travel in the name of science and spending nearly half of any given year on the road, Brown’s work spans the northern and southern hemispheres contributing to high-intensity fire issues such as the connection between wildland fire and our climate and weather. His work benefits us every day as it informs fire management planning and policy.