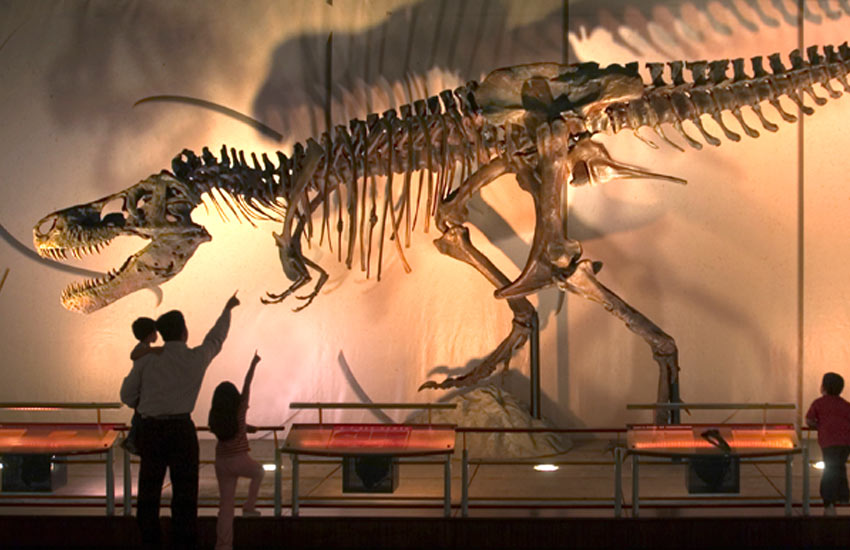 Few things in history capture human interest more than dinosaurs. For many, they conjure images of gigantic, fearsome and mysterious beasts who once inhabited the Earth. But now they’re gone. However, one enormous Tyrannosaurus rex continues to roam the Earth, and her name is Sue.

Sue is the star of A T. rex Named Sue, an exhibition created by The Field Museum in Chicago. The exhibition features a multitude of digital and hands-on exhibits that allow museum visitors to explore Sue’s past and the field of paleontology. The centerpiece of the exhibition is Sue, a 42-foot-long, 12-foot-tall, 3,500 lb. cast of the original skeleton unearthed in South Dakota in 1990.

No dinosaur in the world compares to Sue—the largest, most complete, Tyrannosaurus rex ever discovered.

Only four T. rex specimens containing more than 60 percent of their original skeleton have ever been found. Sue is 90 percent complete—only a foot, one arm, and a few ribs and vertebrae are missing. The specimen was found in the Hell Creek Formation, near Faith, South Dakota, by fossil hunter Sue Hendrickson. In 1997, the Field Museum purchased the 65-million-year-old fossil at auction for $8.4 million, setting the record for the world’s highest price ever paid for a fossil. The cast of Sue’s skeleton began its traveling exhibition tour in June of 2000 and has visited nearly every state in the U.S. and has been to many countries throughout the world.

A T. rex Named Sue will be on exhibit at The Discovery through January 15, 2018.