Save 10% on memberships in December. Use promo code HOLIDAY2022
Learn More Learn More 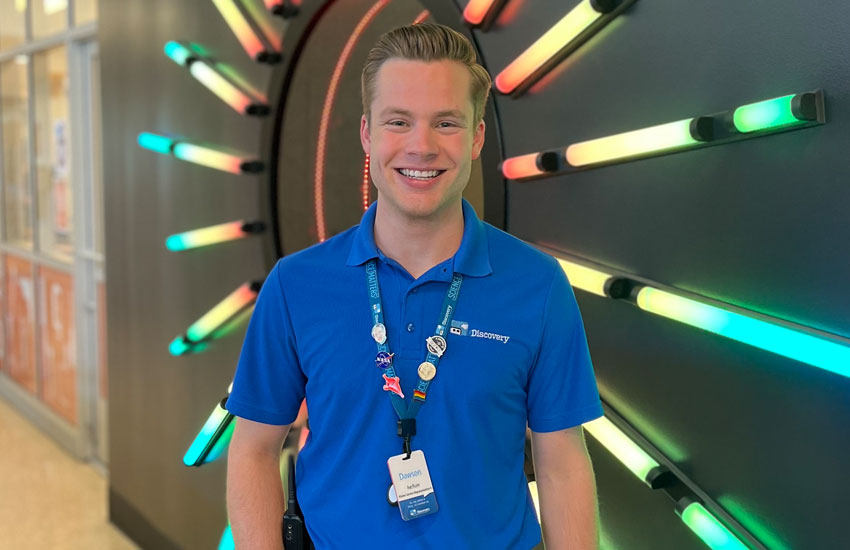 When it comes to keeping things moving at The Discovery, it’s important to remember all the different staff members and the roles they play to keep the museum’s gears turning. One of the pieces in that puzzle is Dawson Deal, Visitor Services Representative II.

Dawson has been working at the museum since December 2021. Ever since he was young, science has always been fascinating to him, and he has never been one to shy away from his passion for it. When he was in the third grade, Dawson hosted “Science with Mr. Deal” every Friday, where he would bring in his own supplies to conduct science experiments inspired by his favorite TV scientist, Steve Spangler. In addition to his love for science, Dawson is also a community-oriented person, which allows him to create meaningful connections and relationships with the people he meets every day.

Before he started at The Discovery, Dawson kept busy with a variety of extracurricular activities. A Nevada native, he attended Edward C. Reed High School where he ran varsity cross country for three years, served as Student Body President, and spent his spare time working in Student Council.  This June, Dawson also celebrated his three-year anniversary with the City of Sparks Parks and Recreation Department, where he works in a similar role coordinating and leading year-round sports camps for youth in our community.  In addition to his work at The Discovery, Dawson has also recently started a position as Advocacy Director for the Department of Government Affairs of the Associated Students of the University of Nevada, where he will be working to advocate for student interest at all levels of government.

When it comes to the future of The Discovery, Dawson hopes to see programming implemented that teaches the importance of studying climate change and how the of use renewable energies and alternative natural resources play a significant role in preventing adverse outcomes of these long-term changes.

“When we think of climate change or carbon emissions, we mainly think of combustion vehicles that run on gasoline or electricity generated by burning from coal.  Still, there are so many other essential factors that are contributing to climate change that also need to be understood and addressed.”

If you see Dawson around the museum, be sure to say hello! He loves welcoming new visitors and members, as it means he and the rest of the staff get the opportunity to share their passion for lifelong learning.