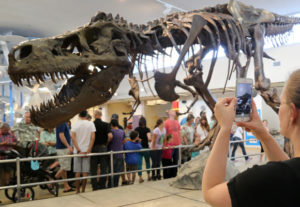 A visitor takes a photo of Sue, a life-size cast of the original fossil from Chicago’s Field Museum.

It turns out Sue loves Reno! The celebrity dino will be extending her stay at the Terry Lee Wells Nevada Discovery Museum (The Discovery). The dramatic, life-sized skeleton cast of Sue – the largest, best-preserved and most complete Tyrannosaurus rex fossil in the world – was originally slated to be on exhibit until January 15, but instead will be staying at The Discovery until May 13.

“We are so excited that we have been presented with the opportunity to have Sue stay with us for a little while longer,” said Patrick Turner, VP of Marketing & Communications at The Discovery. “This has been one of our most popular temporary exhibitions, and this gives everyone a chance to see her if they haven’t yet or revisit before she moves on.”

A T. rex Named Sue has helped The Discovery surpass the one-millionth visitor since the museum opened to the public in late 2011. In 2017 alone, The Discovery welcomed more than 220,000 visitors.

Guests who drop in to visit Sue will be able to bask in her towering presence as well as indulge in the fascinating behind-the-bones history, which is filled with all the scandal, suspense and science of a blockbuster movie.

A T. rex Named Sue, the colossal exhibition from the Field Museum of Chicago featuring a 42-foot-long cast of Sue, will be on exhibit at The Discovery through May 13, 2018. For more information please visit nvdm.org/sue.