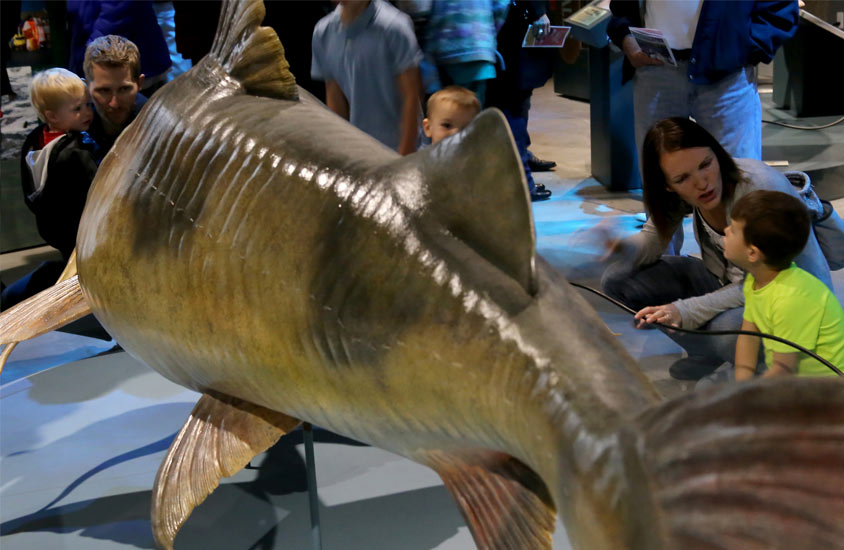 National Geographic’s exhibit Monster Fish: In Search of the Last River Giants began its international journey at The Discovery on November 14, 2015. On its opening day, Monster Fish lured in over 1,200 visitors eager to get a first look at the new exhibit. The Discovery shares a special connection with this exhibit because it comes from local roots. Monster Fish: In Search of the Last River Giants revolves around the research of a fellow Nevadan, Dr. Zeb Hogan. Along with being a National Geographic Fellow and a Host of the Nat Geo WILD series Monster Fish, Zeb is also a Professor at the University of Nevada, Reno.

Monster Fish includes five monstrous, life-size models, captivating videos, and hands-on interactives, which are split between four river-basin regions including North America, South America, Asia, and Australia. Visitors will feel as though they are right there with Zeb when they come face-to-face with over 20 species of monster fish, all more than six feet in length or over 200 pounds! During their adventures through various rivers and lakes of the world, visitors will research and discover how to protect the habitats that these freshwater giants call home. Visitors will try out “Monster Size Me,” an adventure through an obstacle course, or immerse themselves in an exciting mission called “A Monster Mission.” All ages can enjoy catching and releasing with magnetic poles along a stylized riverbank, while older explorers can take the “Fishin’ Decision” digital challenge to see how many species of fish they’ll decide to keep or release.

Monster Fish has created a great deal of excitement from both children and adults. One of our visitors, Sofia from Sacramento, came to The Discovery as a loyal viewer of the Nat Geo WILD show Monster Fish, and was thoroughly engaged in the exhibit. Sofia loves that the exhibit makes the show come to life in a way that everyone can enjoy. “It’s fun to dive in and see the fish in real life” Sofia told The Discovery, she loves being able to learn more about these monster fish and the environments they reside in.

Sofia is not alone; visitors are loving Monster Fish. Lori from Reno enjoys all that Monster Fish is bringing to this area. “The life-size models really put it into perspective of how large these fish really are, and by using these models, I get to see things I wouldn’t be able to see in real life”. One thing is for sure, everyone is able to learn something new from Monster Fish!

The Monster Fish exhibition at The Discovery has been extended through September 5, 2016, but be sure to see it before it swims up stream!

Monster Fish: In Search of the Last River Giants is presented in partnership with the University of Nevada, Reno College of Science.